You may have heard 2016 was Earth’s hottest year on record. You may also remember 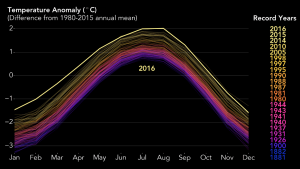 Both NASA and NOAA declare that our planet is experiencing record-breaking warming for the third year in a row. This should be alarming to everyone as even incremental upticks in temperature have a huge effect on our planet.

According to an article published in Scientific American, “While El Niño played a role in bumping up global temperatures during 2015 and 2016, the bulk of the warmth was due to the excess heat trapped by greenhouse gases emitted by humans over the past century, particularly carbon dioxide. In 2016, CO2 concentrations also permanently passed the 400 parts per million (ppm) mark for the first time in human history; during preindustrial times, that concentration was 280 ppm.”

Still No Sign of Rain-out Money From Hard Rock

It’s been three weeks since the KC and the Sunshine Band concert on Old Falls Street was canceled due to rain. The... read more

Rain is threatening to cancel the annual fall festival set on Halloween this Thursday at 5:30 p.m. downtown. With a... read more

Spectrum was featured in the recent issue of Insurance Business Magazine as the top specialist broker for weather insurance. "Given the... read more

Midland motorists drove through a rainy mayhem Sunday that led to numerous cases of flooding throughout the county. The heavy... read more

The Gilbert Days festival on Saturday, Nov. 23, has been canceled due to heavy rain, but the annual parade... read more

On Monday, August 21, 2017, the moon will pass in front of the sun, casting its shadow across all... read more