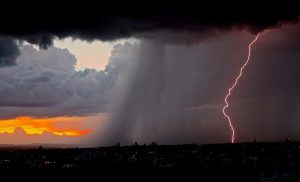 Think you’ve got what it takes to be a meteorologist? Test your knowledge with this Jeopardy-inspired trivia. Click on the question to view the answer and see if you’re right!

1. Brontophobia is fear of this paired weather phenomenon.
What is thunder and lightning?
2. In 1979, the names of hurricanes were changed to include these.
What are men?
3. Though named for snow, it’s the driest state in the U.S.
What is Nevada?
4. TIROS was an experimental prototype for these.
What are weather satellites?
5. This storm’s name combines the Chinese words “ta,” meaning “great,” and “fung,” meaning “wind.”
What is a typhoon?
6. Invented by French scientist Lucien Vidi in 1844, this type of barometer uses a metal capsule instead of mercury.
What is an aneroid barometer?
7. Typhoons, hurricanes and the lows on weather maps are all examples of these atmospheric circulations.
What are cyclones?
8. For pilots, C and V is this – the height of the lowest cloud layer, “and visibility.”
What is the ceiling?
9. A sudden onset of winds increasing by at least 18 mph; it precedes “line” to describe a line of active thunderstorms.
What is a squall?
10. Arica, Chile, in this desert may be the driest place on Earth; it had an annual rainfall of only 0.03 inches during a 59-year period.
What is the Atacama Desert?
11. In December 1995, cold weather killed millions of these wintering in Michoacan.
What are monarch butterflies?
12. Circa 1860, Robert FitzRoy of Britain’s meteorological office rejected prediction and prophecy in favor of this word.
What is forecast?
13. In the 1940s, an anemometer aided Antarctic experiments that first determined this measurement heard in weather reports.
What is wind chill?
14. Edward Lorenz’s idea of linking this creature to changes in the weather became the basis of chaos theory.
What is a butterfly?
15. The rooster atop many church weather vanes is there to remind us of a story involving this apostle.
Who is Peter?

How did you do?? Maybe you knew the answers, or maybe you just got lucky. Either way, don’t bet on getting lucky when it comes to the real weather — get a quote today to insure your snow removal business or upcoming event against undesirable weather!

After some of the recent spring storms, we’ve seen a lot of backlash on social media about shows being... read more

Even as snowfall continues to blanket much of the country, it is never too early to request a weather... read more

If there were a mantra for the events industry, it would be “Hope for the best, but plan for... read more

4 Questions to Ask Yourself When Planning an Event

Pulling off any successful event is no easy feat and the stress is tenfold when planning an outdoor event... read more

6 Tips for Hosting a Virtual Event

In the midst of the coronavirus pandemic, few industries are feeling the effects of social distancing as strongly as... read more

If you’ve been to a conference or convention in the event or snow removal industries, you’ve probably seen Spectrum... read more